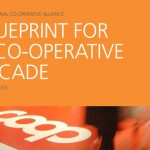 The document ‘Blueprint for a Co-operative Decade’ was published by the International Co-operative Alliance (ICA) in January 2013 following a discussion on the draft version at the Manchester General Assembly in October 2012.

The 2020 vision seeks to build on the achievements of the International Year of Co-operatives and the resilience demonstrated by the co-operative movement since the great financial collapse.