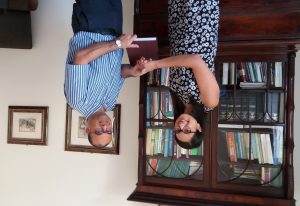 In August 2016, Ms Lindsay Marie Farrugia presented her dissertation to the Malta Co-operative Federation. Ms Farrugia, a Master in Accountancy graduate from the University of Malta prepared a dissertation entitled: The Social Enterprise in Malta: Implications and applicability.

Since the Malta Co-operative Federation had strongly criticised the White Paper and Social Enterprise Bill launched in June 2015 by the Maltese Government, Ms Farrugia, as part of her research, interviewed the CEO of the Federation, Mr Rolan Micallef Attard for a better understanding of the potential of the social co-operative enterprise scenario in Malta and the implications of the White Paper on the co-operative sector.

Ms Farrugia, stated that, social enterprises are organisations which trade to fulfil a primary social purpose. In view of the proposed enactment of a Social Enterprise Act in Malta, a study entitled ‘The Social Enterprise in Malta: Implications and Applicability’ was carried out to assess the social, financial and corporate governance implications, as well as the applicability of the proposed social enterprise legislation in Malta. A mixed methodology was adopted, whereby fifteen interviews were held with experts in the field, including an interview with Mr Rolan Micallef Attard. Such data was supplemented by 52 valid responses to a questionnaire sent both to co-operatives and voluntary organisations in Malta. Conclusions highlight that the proposed legislation has various positive social, financial and corporate governance implications and that the social enterprise, as it is being proposed, is applicable and filling a void within the Maltese business environment. Although such legislation offers both a new legal form and a label, its reference to the Companies Act which ignores social enterprises’ unique social dimension is questionable. Alternatively, a holistic social enterprise regulatory framework may be developed. Furthermore, statutory thresholds, such as for dividend distribution and trade income, are to be possibly rendered more flexible.

Mr Micallef Attard reiterated that the MCF still disagrees categorically with the Bill as presented by Government, in particular the Federation believes that:

Mr Micallef Attard noted that notwithstanding the MCF’s recommendations submitted to Government in July 2015 on the proposed Social Enterprise Act, Government had to date not communicated with the Federation.