Cooperative Banking – An alternative model of banking in Malta 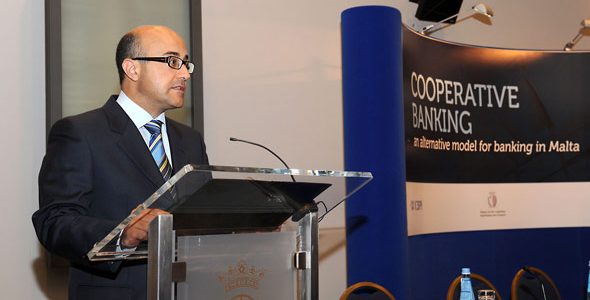 Cooperative Banking – An alternative model of banking in Malta

The Ministry for Fair Competition & Consumer Affairs organised a half day seminar “Cooperative Banking – An Alternative model for banking in Malta”. The seminar was held at the Mediterranean Conference Centre with the distinguihed participation of interational guest speakers specialised in the field as well as the Governor of the Central Bank of Malta, and other local experts.

Minister Dr Jason Azzopardi said that the seminar focuses in particular on a vision to pave the way for cooperative banking to be introduced in Malta. Cooperative Banking, something which, though very popular elsewhere, particularly in continental Europe, has for some reason or other never taken root in Malta. “It is, nevertheless, something which the amendments to the Cooperatives Act which I recently proposed for discussion, are intended to encourage, although this is only one of the innovations which the amendments I am proposing would incorporate.”

This site uses Akismet to reduce spam. Learn how your comment data is processed.

Welcome to the Malta Co-operative Federation Blog. In this section you can find news, the latest blog posts by the CEO, interesting articles collected from the internet and other interesting features.