MCF presents its proposals for Budget 2023

Home/News/MCF presents its proposals for Budget 2023

MCF presents its proposals for Budget 2023 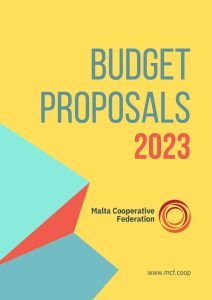 The Malta Co-operative Federation (MCF) has published its proposals for the upcoming National Budget 2023. John Mallia, President of the MCF, said ‘Malta is facing challenges that could be turned into opportunities through the creation of more cooperatives in Malta and Gozo. Co-operatives are people-centred democratic businesses, and are an extremely viable tool not just in the creation of wealth, but more importantly, in a fairer distribution of it.’

Rolan Micallef Attard, Secretary and CEO of the MCF, stated that ‘the co-operative potential in Malta is very real. Through the MCF’s proposals, the government could create the right environment for this model to thrive.’

Some of the proposals include putting co-operatives on a level playing field with other business models. This includes relevant fiscal incentives, strengthening the legislative framework with the direct participation of the cooperative movement, and eliminating legislative discrimination against cooperatives where these exist.  Proposals such as creating the possibility for different entity types to work together through cooperatives, reducing the minimum number of members required to form a co-operative, and facilitating conversion from company to co-operative status are also steps in this direction. The MCF’s proposals also include support for Housing and Renewable Energy co-operatives that are socially viable and can be instrumental for community empowerment.

Welcome to the Malta Co-operative Federation Blog. In this section you can find news, the latest blog posts by the CEO, interesting articles collected from the internet and other interesting features.