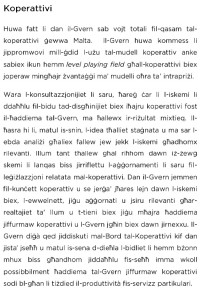 He focused on the situation of the co-operative schemes in the public sector, launched in 1996 and which were not in sync with the 2001 co-operative legislative changes.  It had become apparent, he said, that these two schemes, which were meant to entice government employees to form co-operative societies, did not reach the desired results and that no analysis was made to determine why these schemes failed or whether these schemes were still relevant.

He concluded that the government is discussing with the Co-operatives Board ways on how these schemes may be implemented, such that, throughout 2015 the changes required come into effect thus enabling government employees to register strong co-operatives aimed at increasing productivity in the various service sectors.