“Co-operatives work for the sustainable development of their communities and equality between men and women is crucial to this. We strive to meet the needs of our members, and teamwork is valued and rewarded, rather than competitiveness. The strong lead taken in terms of environmental and social business objectives, including adopting formal policies on sustainability and socially responsible investment, makes it more likely that co-operatives and mutuals would be at the forefront in HR practices, in particular in ensuring that all their staff, women and men alike, are given the opportunities to realise their potential and advance their careers.” 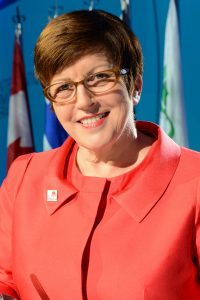 Delivering the International Co-operative Alliance message for International Women’s Day 2014, ICA President, Dame Pauline Green said that gender equality has been a fundamental right in co-operatives, since their inception in the first half of the 19th century. Co-operatives’ typically flat hierarchy encourages a culture of teamwork, where talent is rewarded, rather than competitiveness.

The International Co-operative and Mutual Insurance Federation (ICMIF) report on ‘Women in Leadership Positions’ published on March 06 2014, shows that there are four times more women senior managers in co-operative and mutual insurers than in stock sector. The report surveys what women CEOs, Chairs and Presidents in co-operative and mutual insurers say about their role within their organisation. Unlike other reports, the participants in this study were overwhelmingly candid, sharing in detail their experiences and advice.

Women CEOs and top-level leaders are particularly well represented in co-operative and mutual insurers in the Americas. In North America, seven out of 18 companies are led by a woman (39%). In Latin America and the Caribbean, seven out of 47 ICMIF members have a woman CEO or Board leader (15%). In Europe, according to the Spanish Confederation of Worker Co-operatives (COCETA), 49 percent of people in worker co-operatives are women. Amongst them, 39 percent have directorial positions. A survey of financial co-operative boards in East Africa shows that women’s presence ranges from 24 percent (Kenya) to 65 percent (Tanzania), with a regional average of 44 percent. Co-operatives work for the sustainable development of their communities and equality between men and women is crucial to this.

María Eugenia Pérez, Chairperson of the Alliance’s Gender Equality Committee stated that gender equality within the co-operative movement goes beyond moral and ethical obligations. “We aim to promote economic growth via the efficient use of human talent; by encouraging gender diversity and co-operation, co-operatives maximise positive economic and social progress in local communities, in the developed as well as in the developing world. In these times of crisis, co-operatives provide solutions to the social and economic crisis, but also seize the opportunity to influence and advance social change.”

ICA’s Gender Equality Committee has been significant in shaping the Alliance priorities in the global economic crisis and proposing a strategy for promoting gender equality and for fighting HIV/AIDs.